While out in L.A. the weekend before last (and yes, I didn't realize that that weekend happened to also be the weekend of E3) training with the legendary Larry Hartsell (a student of Bruce Lee, Dan Inosanto and Ed Parker), I ran into someone rather interesting while waiting in line at the airport Burger King to get some “breakfast”.

I noticed the guy standing behind me wearing a t-shirt under his jacket with the DDO: Stormreach logo on it.  Me being me, I asked if he plays the game.  Of course he answers yes... why else would he be wearing the shirt. ;-)  I ask what server does he play on and he tells me.  As it would happen, I play on a different one.  The conversation continues and he asks me what I think of the game.  I proceed to tell him that I think it's a great game with probably the best team playing dynamics of any online game.  Of course, I proceed, to tell him that I think there are some areas that it could be improved upon.  It turns out that he's the lead designer of the game!

We grabbed some food and while scarfing it down so we could get to our respective planes, he proceeds to tell me of all of the goodies that are coming in the upcoming releases, discussed a bit about Neverwinter Nights 2 (which he got to see while at E3) and talked a bit about WoW and their respective budget, overall execution and artwork.  It turns out that he was also previously employed by Wizards of the Coast and TSR... I'm glad to know that someone who has a long history with the D&D franchise is leading up the team to bring such a great first pass at bringing the PnP experience to the online world. 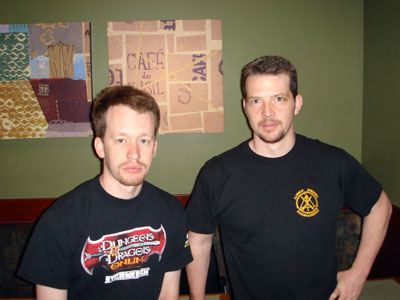 I just want to take a moment to state that I am aware of periodic site issues and am working to get them resolved.  It appears to be a combination of host provider issues and wanna-be-script-k...

So I saw Transformers the other day.  It was a pretty decent movie except the director bought into the ill conceived idea that shaking the camera all around would somehow make the action ...

Let me please take a quick moment to update everyone on some projects that I've been working on: Look Ma, I'm on TV! Well, on twitch.tv that is. I'm currently streaming two different p...